Back in July of 2019, I wrote a blog post 30 Things To Do Before Turning 30. The very first thing on that list was “Adopt a Puppy.” On December 28, just a few days after Christmas, I crossed off that goal when I brought home Lincoln, the sweetest, most adorable 8-week old Golden Retriever puppy. And our first week together has been absolutely wonderful. I feel like he’s been a part of my life for much longer and it’s hard for me to recall time before I had him. He has brought more joy to my life than I ever thought possible! 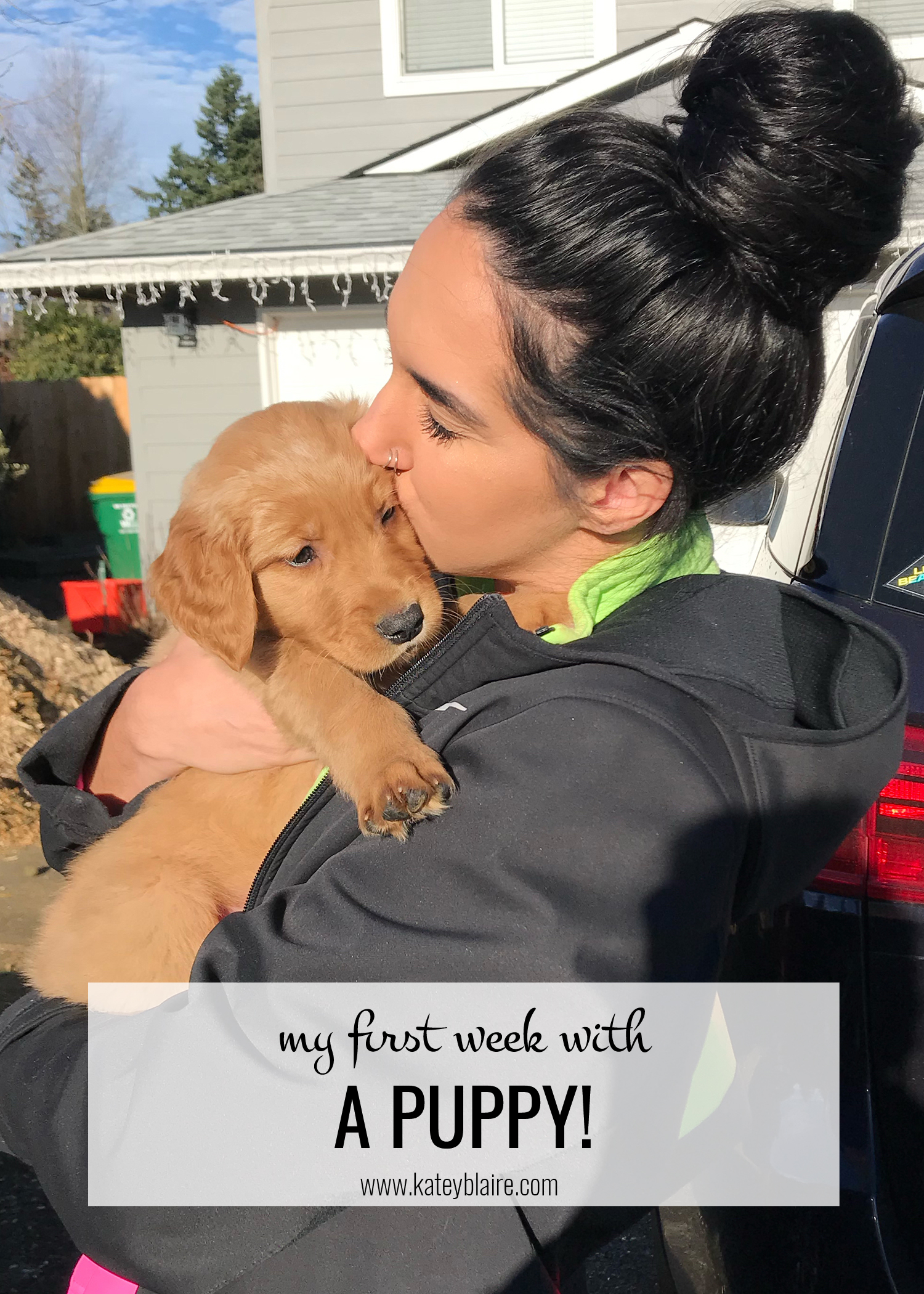 In mid-December, I was able to go meet my puppy at the breeder’s home. I found Linc from a local breeder, Sammiebrook Goldens, and would recommend them to anyone interested in Golden Retriever puppies. He came home with me already microchipped, dewormed and with his first few shots. On that day, I didn’t know which puppy would be mine, only that I would be getting a male. There were three males in the litter and I had my eye on one in particular. If you click the link to Sammiebrook Golden’s site, I had my heart set on Christopher Robin (that was Lincoln’s first name!) The day I arrived to meet my pup, I was lucky enough to get the exact one I wanted. We bonded immediately and I’ll admit I cried a bit. I’ve wanted a puppy for so long! Here’s a few pics from that day.

My friend, who can offer veterinarian chat services online these days, warned me “your life is going to change so much.” “You’re going to be so tired!” “It’s really hard but so rewarding.” And I agree. My life has changed but for the better. I am slightly more tired than usual, but it hasn’t been nearly as hard as I thought. Getting a puppy was probably one of the best decisions I’ve ever made. He is my pride and joy and I cannot tell you how happy I am to be a dog mom.

I took a whole week off work to spend time getting Lincoln acclimated to his forever home. The first few days he yelped in his crate and his play pen and would pee and poo all over my apartment. Now only a week later, he is sleeping through almost the entire night in his crate (except when I wake him up to go potty); he is partially potty trained (using pee pads when he can’t help himself inside); he definitely knows his name; he can easily go up and down stairs and he even sits on command! He is incredibly social and loving with people and he’s had several very successful puppy playdates. Mama couldn’t be more proud!!

Before picking him up, I doggy-proofed my apartment as best I could and bought tons of puppy supplies; a matching leash and collar, a name tag, poop bags, pee pads, a large velvet blue doggy bed and an adorable doggy tote that he will probably fit in for about a month. I set up a doggy play pen in one corner of my apartment where he will also have a crate. I stocked up on different doggy treats and was gifted tons of toys from friends and family. My parents also gifted me carpet spray and a doggy camera for Christmas, both of which will come in handy. I was more than ready for him when I could finally bring him home.

For those wondering, it is possible to have a puppy in a downtown apartment. I live on the 6th floor of a very urban building with no surrounding grass. Everything is concrete. It may make potty training slightly more of a pain, since I can’t just open a door to let pooch outside, but it can be done.

Here’s a day by day break down of my first week with my furry best friend:

Lincoln comes home to his forever home in the Pearl District of Portland. I introduce him to his crate and his play pen, but he doesn’t like it at all. He wants to be around me at all times, but he is so curious about his new home. He eats like a champ, loves his rawhide puppy bone and loves to snuggle my feet. For our first night, I decide to sleep on the couch while Lincoln sleeps in his bed on the floor next to me. He’s a little restless throughout the night and we both don’t get much sleep, but that’s to be expected on the first night! We take potty breaks every 2-3 hours throughout the night, or when I wake up to him moving around.

Introduce Linc to his leash, and he is surprisingly good at walking with it on! We take a few walks around the Pearl and get him into his doggy tote, which he loves. He meets so many people around the neighborhood and is a complete sweetheart. He absolutely loves attention. We begin to work on the “sit” command. Has a few accidents in the house, but is starting to understand to relieve himself on the pee pads with repetition and treats. Another night on the couch for mama and Linc sleeps beside me on the floor in his doggy bed. We both get a little more sleep on night 2, thank goodness.

I took him to the vet for a check-up and he did wonderfully. Our friends at Pearl Vet Hospital gave him a glowing review and he didn’t even squirm when he got two more of his puppy shots! He’s a very healthy, happy pup and that couldn’t make me more at ease. We work on getting used to stairs; at the beginning of the day, Lincoln is terrified and doesn’t want to go down them on his own. With patience and lots of treats, by the end of the day he’s almost a master of going down stairs by himself. He is such a quick learner! We take a trip to go see Grandma & Papa (my mom and dad), who he loves so so much. This is his first car ride with only myself, and he is restless unless he is sleeping on mama’s lap. I’m not a fan of driving with a dog on my lap, but it works to calm him down. Eventually I will need to get him a doggy car seat or something to help with car rides. He still is not a fan of his crate or his puppy pen and cries loudly when I put him in either one, so another night on the couch for me while he sleeps beside me on the floor.

I work on leaving Lincoln in his puppy pen for longer periods of time while I’m doing things around the house. He still cries loudly, but eventually tires himself out and falls asleep if I put his doggy bed in it. He has begun to chew on anything he can find, so I carefully watch him and replace unchewable items (sneakers, cords, furniture) with his toys. He especially loves rawhide puppy bones and will chomp on them for hours if I let him. He’s getting better at recognizing the “sit” command. This was NYE, so I had my cousin come over and watch him for a few hours while I went out with some friends to celebrate. He was an angel while mama was gone and was so excited when I returned home. Warms my heart!

I bring him to meet his cousin doggies, two adult Golden Retrievers. He’s a little apprehensive at first, but warms up to them quickly and just wants to play. He also masters the “sit” command today, and I am over the moon about it. “Sit” in 5 days?! You just have to be consistent with the training and the treats! We go visit Grandma & Papa too and spend lot of time playing and exploring their large backyard. He has one major indoor accident which ruins a rug (it was poop on a shaggy rug, so couldn’t fully get it out), but I wasn’t in love with that rug anyway. Even with all the excitement of the day, Linc’s a little restless throughout the night so we both don’t get much sleep. He wakes up about every two hours and wants to play, so we work on fetch and use his teething toys to play tug-o-war.

Due to the lack of sleep from previous nights, we spent a lazy day inside. I continue to get Lincoln to sit on command and work on getting him to pee on pee pads. I left him alone for the very first time in his play pen while I went out to get some groceries, and thankfully he slept the entire time I was away – I watched him on the doggy cam to make sure. We test out sleeping in his crate for the first time too; by night 6, I’m so ready to sleep in my own bed. So I put my slippers (he loves to snuggle my them) inside his crate, which I move next to my bed, and he surprisingly doesn’t fuss! YES, a night sleeping in my bed, hallelujah!

Lincoln sleeps through most of the night in his crate! I woke him up twice throughout the night to go potty, and then with a little coaxing he goes right back in to sleep. I am so thrilled, and hoping this turns into a routine. I’ll slowly start to place his crate further and further away from my bed so eventually he’ll sleep in his crate inside his play pen. This day we went to Mud Bay to pick out more rawhide bones and I brought him to my cousin’s work to meet her and her coworkers. Then we walked up and down NW 23rd AVE so I could do some shopping. For part of the way Lincoln did great on his leash, but would get tired fairly quickly so I would put him into his doggy tote bag. Almost everyone who passed us wanted to meet him and say hi, and Linc was such a good boy!

I’m so glad he is getting a lot of exposure to other people so he’s social and friendly as an adult. At night, we hosted a doggy game night and had five dogs in my apartment! Lincoln played so nicely with one dog in particular who generally doesn’t like puppies, so that was a huge win. Boy, was he tuckered out from all the excitement of this day and he slept the entire night again in his crate, waking up only once to go bathroom!

If you’re reading this post and are considering getting a puppy, I cannot tell you how wonderful and rewarding it is to be a dog mom. Lincoln is an angel, a teething angel mind you, but he is such a fantastic pup and I am so excited to watch him grow up. I do wish he could stay this adorable forever, but I also can’t wait until he’s a little bigger so I can bring him to the dog park, go on runs and take him on outdoor adventures. Just a few more months until he has all his shots and we can begin to introduce him to the dog-friendly Portland community!

As always, thank you for reading! XOXO

10 Things to do in Nashville

Luck of the Irish